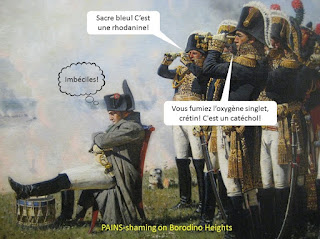 From afar, the Grande Armée appears invulnerable. The PAINS filters have been written into the Laws of MedChem and celebrated in Nature. It may be a couple of thousand kilometers to Moscow but what could possibly go wrong?

Viscount Wellington (he is yet become the 'Iron Duke') shadows the Grande Armée from the south. Dismissed as 'The Sepoy General' (he just writes blogs), Wellington knows that the best way to win battles is to persuade opponents to first underestimate him and then to attack him. He also knows that seemingly intractable problems often have simple solutions and, when asked years later by Queen Victoria as to how the sparrow problem of the new Crystal Palace might be resolved, his pithy response is, "Sparrowhawks, Ma'am".

Marshal Ney guards the southern flank of the Grande Armée and Wellington knows, from the Peninsular War, that Ney is a formidable opponent. Wellington is fully aware that, on the steppes, it will be all but impossible to exploit Ney's principal weakness (an unquestioning and unwavering belief in meaningfulness of Ligand Efficiency). Wellington knows that he will have to be very, very careful because Ney is a masterful exponent of the straw man defense.

The first contact with the Grande Armée occurs unexpectedly in the Belovezhskaya Pushcha. One of Ney's subordinates has set off in hot pursuit of a foraging party of thiohydantoins (which he has mistaken for rhodanines) and left the flank of Grande Armée exposed. Wellington orders an attack in an attempt to capitalize on the blundering subordinate's intemperance and it is only through the prompt action of Ney, who takes personal charge of the situation, that disaster is averted.

The first skirmish proves to be tactical draw although Ney's impetuous subordinate has been relieved of his command and put on clam-gathering duty. Wellington orders a diversionary attack designed to probe the Grande Armée defenses and then another intended to lure Ney into counter-attacking his carefully prepared defensive position. Ney initially appears to take the bait but soon disengages once he perceives the full extent of Wellington's defensive position. It will prove to be their final clash for the duration of this campaign.

The next contact with the Grande Armée takes place at Smolensk. A regiment of Swiss Guards, on loan from the Vatican, becomes detached from the main force and blunders into Wellington's outer defensive belt. The Swiss Guards' halberds prove to be of little use in this type of warfare and they are swiftly overwhelmed. As they are taken captive, many of the Swiss Guards are heard to mutter that the six assays of the PAINS panel are "different and independent, different and independent..." although none seems wholly convinced by their mantra.

Following the tactical victory at Smolensk, Wellington receives word by messenger pigeon that Marshal Kutuzov will attempt to stop the Grande Armée at Borodino (on the road to Moscow) and that Wellington should do what he can to harass the Grande Armée so as to buy more time for Kutuzov to complete his preparations. Wellington orders another diversionary attack which exposes the narrowness of the PAINS filter applicability domain before proceeding to Borodino where he arrays his troops to the south of the road to Moscow.

The armies of Wellington and Kutuzov are now disposed so as to counter a flanking maneuver by the Grande Armée but it is the army of Kutuzov that will bear the brunt of the attack while Wellington's force is held in reserve. Wellington marvels at Kutuzov's preparations and the efficient manner in which he has achieved optimal coverage of the terrain with the design of the training set. Not a descriptor is wasted and each differs in its own way since they are uncorrelated with each other. Nobody will be able to accuse Kutuzov of overfitting the data. Over a century later, Rokossovsky will tell Zhukov, "everything I know about QSAR, I learned from Kutuzov".

The Grande Armée advances confidently but Kutuzov is ready and up to the task at hand. The Grande Armée is first stopped in its tracks by a withering hail of grapeshot (more than half of the PAINS alerts were derived from one or two compounds only) and then driven back (...were originally derived from a proprietary library tested in just six assays measuring protein–protein interaction (PPI) inhibition using the AlphaScreen detection technology only). Running out of options, the Grande Armée commanders are forced to commit the elite Garde Impériale which temporarily blunts Kutuzov's advance. Wellington maneuvers his troops from their defensive squares into an attacking formation and awaits Kutuzov's order to commit the reserve.


Although the Grande Armée commanders consider it beneath them to do battle with the lowly Sepoy General, they have at least strengthened their southern flank in acknowledgement of his presence there. This in turn has weakened the northern flank which has been assumed to be safe from interference and it is at this point in the battle that the Grande Armée gets an unpleasant surprise. There is the unmistakable sound of hoofbeats coming from the north, quiet at first but getting louder by the minute. Emerging from the smoke of battle, Marshal Blücher's Uhlans slam into the lightly-protected northern flank of the Grande Armée (the same PAINS substructure was often found in consistently inactive and frequently active compounds). Following an attack plan on which Blücher has provided vital feedback, Wellington commits his troops although, in reality, there is little left for them to do aside from pursuing the retreating Garde Impériale.

There are lessons to be learned from the fate of the Grande Armée. The PAINS filters were caught outside their narrow applicability domain on the vast Russian steppes and their fundamental weaknesses were brought into sharp focus by Blücher and Kutuzov who made effective use of large, non-proprietary data sets. Whether you're talking about T-34s or data, quantity has a quality all of its own. Science blogs are here to stay although, from time to time, every blogger should write a journal article pour encourager les autres.