It really was great to get back to Brazil. Early in November, I attended the 2010 Brazilian Symposium on Medicinal Chemistry that in Ouro Preto. The conference commemorated the work of Carlos Chagas who identified and fully characterized the disease that now bears his name. His work has been described in Wikipedia as “unique in the history of medicine because he was the only researcher so far to describe completely a new infectious disease: its pathogen, vector (Triatominae), host, clinical manifestations and epidemiology”. Chagas worked at and subsequently became the director of the medical research institute founded by Oswaldo Cruz. Although Chagas spent most of his working life in Rio de Janeiro, he was born a Mineiro and only left his home state for his university studies. Ouro Preto is one the ‘must see’ attractions of Minas Gerais (and Brazil) and here are a couple of pictures to give those who were not there an idea of what they were missing. 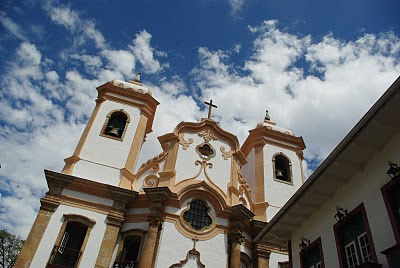 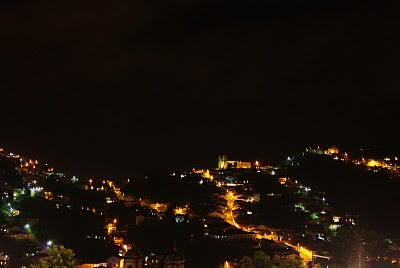 Although the work of Carlos Chagas is worthy of celebration the current state of treatment of Chagas Disease is most definitely not. Like the better known African Sleeping Sickness, it is a trypanosomal disease and of minimal interest to Big Pharma. The drugs used for treatment have unpleasant side effects and once the disease enters the chronic phase they become a lot less effective. A number of lectures focus on the nature of the disease and I find these particularly interesting, although occasionally gruesome (I always appreciate these reminders of why I never considered pathology as a profession).

Álvaro Romanha delivers an interesting keynote lecture in which he looks back over a long career in parasitology. He describes characterisation of the effects of a number of compounds (including one developed by my former employer) on the Chagas parasite. Lucio Freitas-Junior and Andrei Leitão both talk about cell-based assays which can be used in target identification as well as lead discovery. I hope the folk doing natural product research are taking notes...

Barry Sharpless delivers an entertaining lecture on Click Chemistry and I also enjoy talks by Mike Gelb and Tom von Geldern since these both have a strong medicinal chemistry focus. The work described by Mike used Tipifarnib (1), a farnesyl transferase inhibitor as a starting point. This compound kills T. cruzi and its good pharmacokinetic properties reflect the fact that it had been in clinical development. It turns out that the compound actually inhibits the trypanosomal lanosterol 14-demethylase and this is the reason that it is able to kill the parasite. The optimized compound (2) shows efficacy against acute Chagas in mice and is sufficiently selective not to inhibit human lanosterol 14-demethylase or farnesyl transferase. The focus of Tom’s lecture is African Sleeping Sickness although this is still highly relevant to Chagas Disease. He describes an interesting series of cyclic boronate esters (3), the mode of action of which is still uncertain. If you’re going after Sleeping Sickness you’re going to have to get your drug through the blood brain barrier. Tom describes some of the approaches that the team adopted to optimize pharmacokinetics and achieving good Central Nervous System (CNS) penetration. In the chronic phase of Chagas Disease the parasites take refuge in the cells of their host so the drug has an additional barrier to cross. I wonder how the presence of an intracellular parasite might stimulate expression of efflux transporters in a host cell? That would indeed be sneaky... 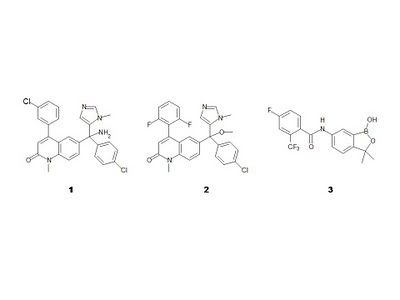 Cristiano Guimarães presents analysis of relationships between permeability and physicochemical properties such as polarity and molecular size. However, I am more interested in what he has to say about re-scoring of docking poses. In particular, he notes that conformational entropy lost on binding tends to get over-estimated and has published some of this work. Enthalpy is the focus of the lecture by John Ladbury who describes how calorimetry can be used as a tool for understanding biomolecular interactions and an aid to drug design. The idea is that enthalpy changes associated with binding reflect the extent to which polar interactions form between the molecules in the complex. If you can exploit polar interactions to increase affinity then hopefully you’ll end up in a better place because polarity tends to be associated with better aqueous solubility, selectivity and metabolic stability. However, interpretation of the enthalpy and entropy changes associated with binding remains a challenging problem. I'd suggest taking a look at John's recent publication and recent discussion in the LinkedIn Medicinal Chemisry and Drug Discovery Group if you want to find out more.

That just about wraps up the technical part of this post and there is a page for links to talks. However, I did manage to get a few pictures including one of Carlos and another of his boss at the opening reception. 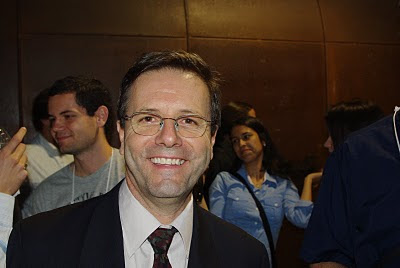 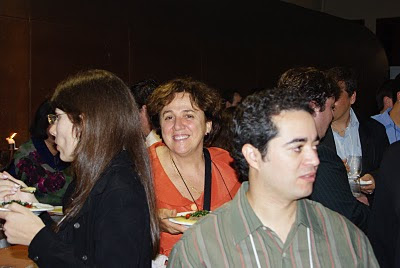 The following photos were taken at afternoon coffee on the last day of the conference. The first of these shows three of my friends from Rio and it was Daniel who did an excellent job introducing and chairing the molecular design session in which I spoke. 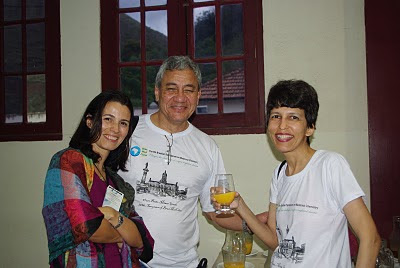 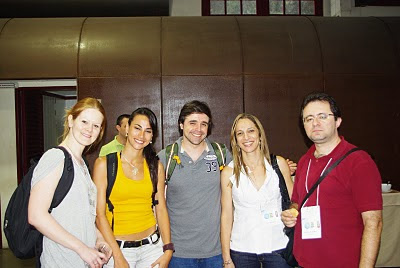 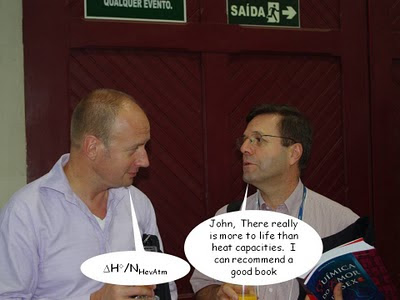 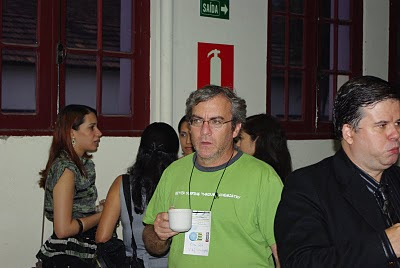 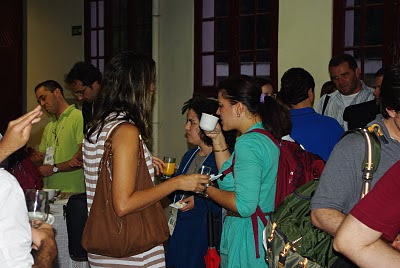 These pictures were taken towards the end of the conference. The paparazzo certainly knows how make the ladies from Porto smile and Carlos does look happy to be passing the baton to Vera who will be organising BrazMedChem2012. 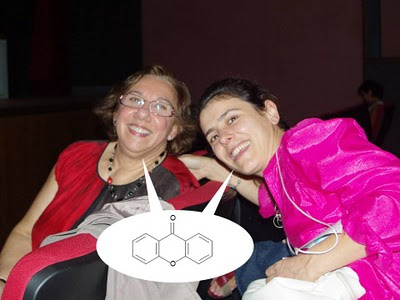 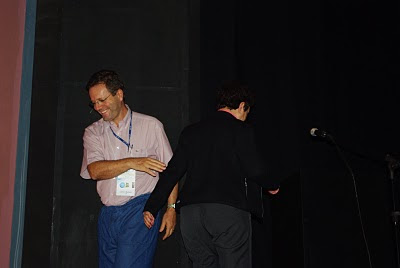 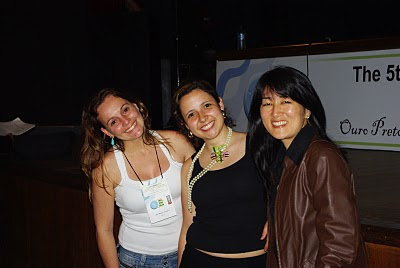 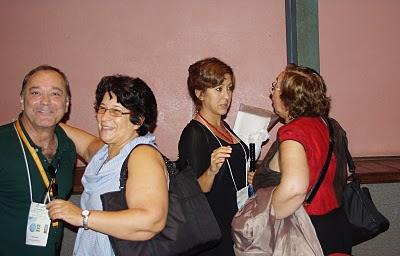 Then it was time for dinner. Tom, Roberto and Ivan were staying in the annex and had to be be summoned. Tom looks a bit hungrier than the other two. 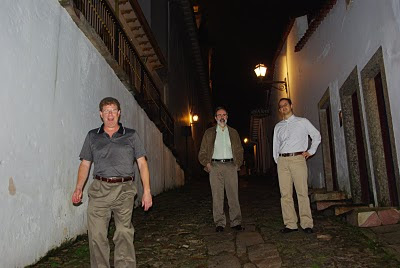 These folk are from FIOCRUZ in Belo Horizonte apart from Claudia (Federal University of Ouro Preto) and Malu who can't resist the photo opportunity. Andrei is looking quite intense in the next photo, Patricia less so. 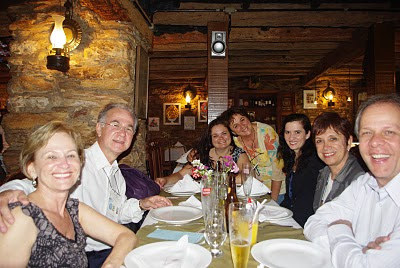 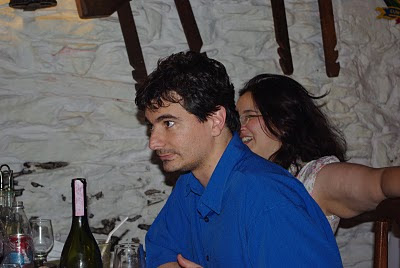 These two photos are a couple of my favorites. I wonder if Barry is suggesting to John that the adiabatic stereoelectrostatic compressibility of the polarisability tensor may well be the the elusive Universal Efficiency Metric that he is searching for. Of course they could just be swapping fishing stories. One of the highlights of the dinner was Mike playing classical guitar and I was pleased that caipirinha consumption did not interfere with ability to operate a rather bulky digital SLR. 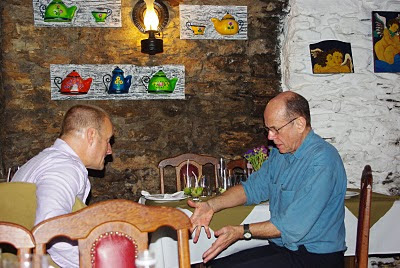 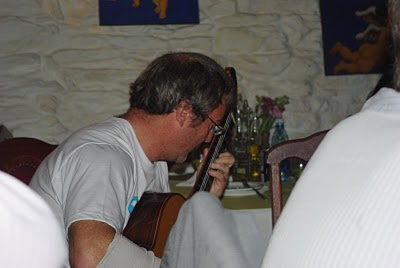