The third annual survey (F2L2017) of fragment-to-lead (F2L) optimizations was published last week. Given that it was the second survey (F2L2016) in this series, that prompted me to write 'The Nature of Ligand Efficiency' (NoLE), I thought that some comments would be in order. F2L2017 presents analysis of data that had been aggregated from all three surveys and I'll be focusing on the aspects of this analysis that relate to ligand efficiency (LE).

As noted in NoLE, perception of efficiency changes when affinity is expressed in different concentration units and I have argued that this is an undesirable feature for a quantity that is widely touted as useful for design. At very least, it does place a burden of proof on those who advocate the use of LE in design to either show that the change in perception of efficiency with concentration unit is not a problem or to justify their choice of the 1 M concentration unit. One difficulty that LE advocates face is that the nontrivial dependency of LE on the concentration unit only came to light a few years after LE was introduced as "a useful metric for lead selection" and, even now, some LE advocates appear to be in a state of denial. Put more bluntly, you weren't even aware that you were choosing the 1 M concentration unit when you started telling medicinal chemists that they should be using LE to do their jobs but you still want us to believe that you made the correct choice?

I'm assuming that the authors of F2L2017 would all claim familiarity with the fundamentals of physical chemistry and biophysics while some of the authors may even consider themselves to be experts in these areas. I'll put the following question to each of the authors of F2L2017: what would your reaction be to analysis showing that the space group for a crystal structure changed if the unit cell parameters were expressed using different units? I can also put things a bit more coarsely by noting that to examine the effect on perception of changing a unit is, when applicable, a most efficacious bullshit detector.

The analysis in F2L2017 that I'll focus on is the the comparison between fragment hits and leads. As I showed in NoLE, it is meaningless to compare LE values because LE has a nontrivial dependency on the concentration unit used to express affinity. LE advocates can of course declare themselves to be Experts (or even Thought Leaders) and invoke morality in support of their choice of the 1 M concentration unit. However, this is a risky tactic because physical science can't accommodate 'privileged' units and an insistence that quantities have to be expressed in specific units might be taken as evidence that one is not actually an Expert (at least not in physical science).

So let's take a look at what F2L2017 has to say about LE in the context of F2L optimizations.


This might be a good point at which to remind the authors of F2L2017 about some of the more extravagant claims that have been made for LE. It has been asserted that “fragment hits typically possess high ‘ligand efficiency’ (binding affinity per heavy atom) and so are highly suitable for optimization into clinical candidates with good drug-like properties”.  It has also been claimed that "ligand efficiency validated fragment-based design".  However, the more important point is that it is completely meaningless to compare values of LE of hits and leads because you will come to different conclusions if you express affinity using a different concentration unit (see Table 2 in NoLE). It is also worth noting that expressing affinity in units of 1 M introduces selection bias just as does the requirement for 100-fold potency improvement.


Had I been reviewing F2L2017, I'd have suggested that the authors might think a bit more carefully about exactly why they are analyzing differences between LE values for fragments and leads. A perspective on fragment library design (reviewed in this post) correctly stated that a general objective of optimization projects is “ensuring that any additional molecular weight and lipophilicity also produces an acceptable increase in affinity". If you're thinking along these lines then scaling the F2L potency increase by the corresponding increase in molecular size makes a lot more sense than comparing LE for the fragments and leads. This quantifies how efficiently (in terms of increased molecular size) the potency gains for the F2L project have been achieved. This is not a new idea and I'll direct readers toward a 2006 study in which it was noted that a tenfold increase in affinity corresponded to a mean increase in molecular weight of 64 Da (standard deviation = 18 Da) for 73 compound pairs from FBLD projects. This is how group efficiency (GE) works and I draw the attention of the two F2L2017 authors from Astex to a perceptive statement made by their colleagues that GE is “a more sensitive metric to define the quality of an added group than a comparison of the LE of the parent and newly formed compounds”.

The distinction between a difference in LE and a difference in affinity that has been scaled by a difference in molecular size becomes a whole lot clearer if you examine the relevant equations. Equation (1) defines the F2L LE difference and first thing that you'll notice is that is that it is algebraically more complex than equation (2). This is relevant because LE advocates often tout the simplicity of the LE metric. However, the more significant difference between the two is that the concentration that defines the standard state is present in equation (1) but absent in equation (2). This means that you get the same answer when you scale affinity difference by the corresponding molecular size difference regardless of the units in which you express affinity. 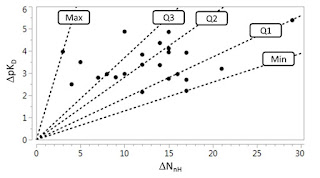 So now it's time to wrap things up. A physical quantity that is expressed in a different unit is still the same physical quantity and I presume that all the authors of F2L2017 would have been aware of this while they were still undergraduates. LE was described as thermodynamically indefensible in comments on Derek's post on NoLE and choosing to defend an indefensible position usually ends in tears (just as it did for the French at Dien Bien Phu in 1954). The dilemma facing those who seek to lead opinion in FBDD is that to embrace the view that the 1 M concentration unit is somehow privileged requires that they abandon fundamental physicochemical principles that they would have learned as undergraduates.
Posted by Peter Kenny at 19:07 4 comments: