A couple of talks on Figshare


I've started using Figshare and have uploaded my first two harangues. Late last month, I did a talk on ligand efficiency at Evotec UK that was based on my recent article in Journal of Cheminformatics (which had caused two of the reviewers to spit feathers when the manuscript was initially submitted to Journal of Medicinal Chemistry). Last week, I travelled to Ireland to seek an audience with with Maynooth University's renowned Library Cat (see photo below). Seeing as I was over there anyway, I also gave a talk (Hydrogen bonding in context of drug design) that drew on material from two articles (1 | 2) on hydrogen bonding from our work in Nequimed. 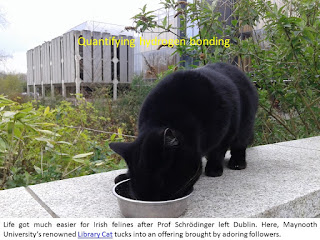 Drug design is a multi-objective endeavor. Some objectives such as maximization of affinity against target(s) and minimization of affinity against anti-targets are easily defined. Other objectives such as controllability of exposure are much less easily defined and this means that drug design is indirect. Controllability of exposure is the focus of pharmacokinetic optimization and I recently became aware of an exciting new development that will surely reshape the pharmacokinetic field and transform drug discovery beyond all recognition. 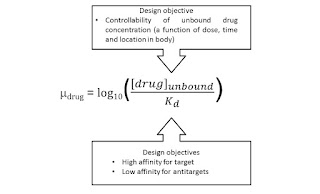 Target engagement potential and the multiple objectives of drug design


The exciting results from another seminal study by the Budapest Enthalpomics Group (BEG) look set to revolutionize the way that we think about pharmacokinetics. The work, funded by Mothers Against Molecular Obesity (MAMO), was described in a book chapter that was prematurely posted online although the error does appear to have been recognized because the article is no longer publicly visible. In a study that will undoubtedly disrupt drug discovery, it is clearly shown that the thermodynamic signature for the binding of a ligand to a protein is predictive of the physicochemical behavior of the ligand even when that protein is absent from the system.


The theoretical treatment introduced in this groundbreaking study is formidable and the starting point is is an eigenvalue decomposition of the entropic field tensor in reciprocal heavy atom space. Machine learning using the Blofeld Optimized Ligand Lipophilicity Of Cryogenic Krypton Solvates algorithm demonstrates unequivocally that the Grayling annihilation operator can be used to eliminate the entropy (and its efficacy-limiting dependence on the definition of the standard state) from any in vivo system. This leads to highly-efficient, enthalpy-driven pharmacokinetics in which the clearance (shown to be strongly correlated with the trace of the entropic field tensor) can be significantly attenuated. "The key to successful pharmacokinetic optimization is to eliminate the elimination", explains institute director Prof Kígyó Olaj, "and we have shown, for the first time, that entropy can be exorcised from the equations of pharmacokinetics with even greater efficiency than if it had been done by Torquemada himself."
Posted by Peter Kenny at 06:44 No comments: