So I'm back in Melbourne, one of my favorite cities, and am currently amusing myself by looking for transition states which some of you will know are merely first order saddle points on potential energy surfaces. I actually find reactivity a lot more interesting than binding so it's great that my hosts are interested in these problems. Of course there's a lot more to do in Melbourne than searching for imaginary forces and negative frequencies and last week I went to watch the Australian Open.

Before I get to the tennis, I'll mention the Research Works Act which can be seen as protectionism (of academic publishers) and readers of this blog will know that I have some issues with journal editors. Well it turns out that protectionism is everywhere even in what you would think would be the fully competitive environment of the Australian Open. When you attend the Open, any bag you take in is (quite rightly) inspected and they'll be looking carefully for particularly dangerous items. Like lenses with a focal lengths greater than 200mm. Why are these considered so dangerous, you might ask? Well the danger posed by such contraband is that it might allow its owner to take a really good picture. While the organisers of the Open want you to enjoy the tennis and buy lots of food and drink, the organisers of the Open do not want you to take good pictures. Anyway here's a picture of the official photographers whom the organisers of the Open are 'protecting' from me and my Pentax K200. 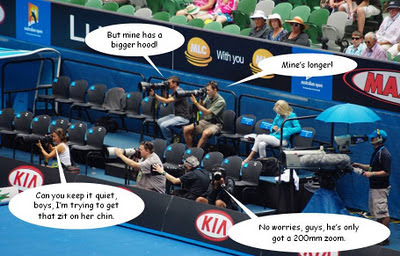 The photos are from the match between Maria Sharapova and Angelique Kerber and I'd hoped that it would turn into an epic struggle of Kurskian proportions. As it transpired, Kerber's Panzerfausts were no match for Sharapova's Katyusha batteries. I couldn't help wondering if Maria had modelled her famous 'vocals' on the unique music of Stalin's Organ. 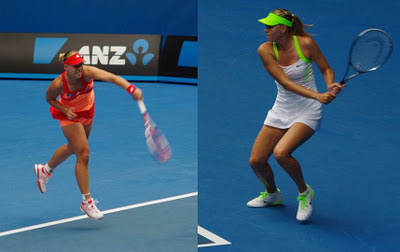 The match was not without its lighter moments and Maria aborted one serve to entertain us with a dance move from Swan Lake that would not have disgraced the Bolshoi. However, it was soon clear that poor Angelique was not having a good day in the office and, after she bashed yet another ball into the net, I was not going to contradict her. On the bright side, at least she didn't try to blame the Romanians or start raving about Steiner's division. 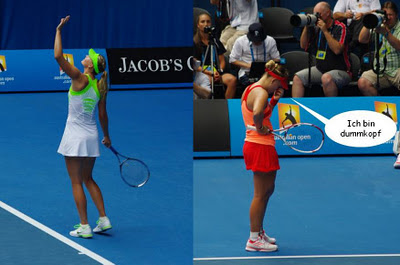 As had always seemed probable, the match concluded in two sets and at the post-match interview, Maria demonstrated her familiarity with the principles and practise of High-Throughput Screening. 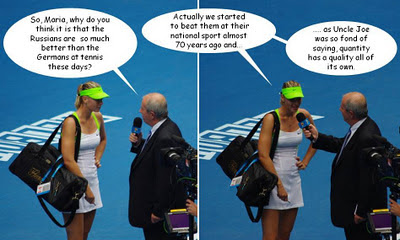