It’s been ages since my last COVID-19 post (How not to repurpose a 'drug') and I’ll kick blogging off for 2021 with a follow up to an even older post (SARS-CoV-2 main protease. Crowdsourcing, peptidomimetics and fragments). I consider it unlikely that a SARS-CoV-2 main protease inhibitor, designed from scratch, will be available in time to have real impact on the current pandemic (in saying this, I’m making the huge assumption that defeat does not get snatched from the jaws of victory on the vaccination front). While many grinning Lean Six Sigma ‘belts’ (and their synchronously smiling allies in Human Resources) would denounce this as negative and defeatist, what I’m really getting at is that we need to think about targeting SARS-CoV-3 main protease when designing inhibitors for SARS-CoV-2 main protease. As Tom Lehrer advises in the intro to So Long, Mom, “If any songs are going to come from World War III, we better start writing them now”. 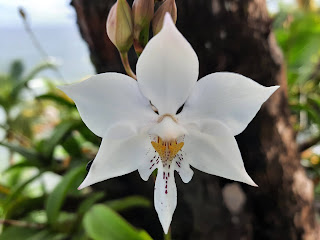 If we’re designing a SARS-CoV-2 main protease inhibitor to also hit SARS-CoV-3 main protease then it’d be a good idea to engineer it to have greater affinity than necessary for the current target. In the fourth of his rules for air fighting, ‘Sailor’ Malan (readers may also be interested in his insights into fragment screening library design) asserts that “height gives you the initiative” which can be adapted for drug design as “affinity that gives you the initiative”.  We should anticipate that inhibitors optimized against the current target will have lower affinity for the future target(s) although it’s obviously not a problem if this proves not to be the case. In any case, high affinity allows you to use a lower dose and that’s an important consideration if you’re planning for healthy people such as nurses and doctors to take the drug prophylactically in order to remain healthy. For a SARS-CoV-2 main protease inhibitor, I’d be looking at a target affinity of 1 nM (or better) which I believe would be achievable without causing too many self-appointed arbiters of 'compound quality' to spit feathers. Pfizer began a phase I study of the SARS-CoV-2 main protease inhibitor PF-00835321 (Ki = 0.27 nM; dosed intravenously as the phosphate pro-drug PF-07304814) in September 2020 although this compound had actually come from a discontinued SARS-CoV project.

If we want to maximize the chances that a SARS-CoV-2 main protease inhibitor will exhibit comparative affinity for SARS-CoV-3 (or even SARS-CoV-4) then we need to exploit protein structural features that are likely to be conserved between the different main proteases. This points to milking as much activity as possible out of the core substructure of the inhibitor as a design strategy. With this in mind, I suggest that we really do need to exploit the catalytic cysteine if we’re serious about treating COVID-32 (or worried about SARS-CoV-2 main protease mutations).

In drug design, we typically exploit a catalytic cysteine by forming a covalent bond between the thiol sulfur and an electrophilic atom in the molecular structure of the inhibitor (PF-00835321 uses the carbon of a carbonyl group to engage the catalytic cysteine). The functional group containing the electrophilic atom is commonly referred to as a “warhead” and covalent bond formation between cysteine can either be reversible or irreversible. Geometric constraints associated with covalent bond formation are typically a lot more stringent than for hydrogen bonds and you’ll make life much easier for yourself by getting the warhead into structures as early as possible in hit-to-lead. I generally recommend using reversible warheads in design of cysteine protease inhibitors (PF-00835321 binds reversibly to SARS-CoV-2) and present my reasoning in this document. In essence, irreversible inhibition adds complexity to design (both Ki and kinact need to be controlled) while placing greater technical demands on the design team (e.g. for generation of the structural models for transition states required for structure-based design).

The argument typically presented in support of irreversible inhibition (and slow binding kinetics) is that it leads to longer duration of action. This argument emphasizes benefits of slow (or zero) off-rate during the elimination phase while ignoring disadvantages of slow on-rate during the distribution phase and I’ll point you to an insightful article by my former colleague Rutger Folmer. While there will be situations in which irreversible inhibition really is the best option, the decision as to whether to go for reversible or irreversible inhibitors is one that should be carefully considered at the start of the project. In drug discovery, it usually ends in tears once the tail starts wagging the dog as would be the case if choice of screening tactics (covalent fragment screening typically finds irreversible binders) were to dictate lead optimization strategy. In particular, I wouldn't really recommend the laissez faire approach to project management (“once the rockets are up, who cares where they come down”) chronicled by Tom Lehrer.

Here's some information that may be of interest if you're selecting or designing warheads to form covalent bonds with catalytic cysteines. First, a couple of comparative studies of reversible and irreversible warheads. Second, some papain inhibition data taken from the literature ( B1977 | W1972 | L1971 ), summarized in the graphic below, that is relevant to fragment library design.

Off-target activity is always a concern in drug design since this can cause toxicity (it’s often considered politer to say “adverse drug reaction” rather than use the uncouth T-word although Tom Lehrer provides a useful perspective) and that’s a strong rationale for trying to achieve a low therapeutic dose. It’s my understanding (still wading through literature) that SARS-CoV-2 main protease functions in the endoplasmic reticulum which means that the relevant physiological pH is close to neutral. Many proteases (potential anti-targets for SARS-CoV-2 main protease inhibitors) function in acidic compartments such as lysosomes and the presence of a basic center in the molecular structure of an inhibitor will tend to draw it into these acidic compartments. When designing SARS-CoV-2 inhibitors, the safest option is simply to avoid basic centers (see F2005) . In particular, to link a ‘gratuitous’ basic center and an irreversible warhead would be to tempt launchpad misadventure.

I'll conclude the post with an observation that the COVID-19 pandemic seems to have triggered a parallel pandemic in scholarly publishing which is forcing scientists to be more creative in finding new ways to getting their messages to stand out. I'll let Tom Lehrer have the last word.