FBLD 2012 is about to happen. Although I'll not be there (and not even nearby), I thought that a preview, like the one posted recently for EuroQSAR (which I also didn't go to) might be in order.

Rod Hubbard will kick things off and he always does a great talk.  Following his contribution will be three talks from Big Pharma.  I've only ever been to one fragment conference and the Big Pharma contributions at that meeting tended to be strategy-heavy and results-light.  Hopefully things will have moved on a bit in the last three and a half years...

Were I attending the meeting, I'd be paying particularly close attention to the membrane protein talks (and might even take the opportunity to ask one of the creators of the Rule of 3 how hydrogen bond acceptors are defined when applying Ro3).  I would also be trying to learn as much as possible about newer technologies for measuring affinity.  Remember that the power of a fragment screening assay is defined by the weakness of the binding that can be detected. Although always desirable, high throughput is a secondary consideration in these assays since one rationale for screening fragments is that one doesn't need to assay as many compounds.  Expect to see at least one speaker get reminded that in SPR molecules are 'tethered' rather than 'immobilised'.

Thermodynamics and kinetics provide the focus of a few of the talks and usually one will hear about the benefits of 'enthalpy-driven' binding and slow off-rates.  My stock question for those who assert the benefits of binding that is 'enthalpy-driven' is, "how do isothermal systems sense enthalpy changes associated with binding?" and I have also made this point in print.  For a fixed Kd reducing the off-rate will also reduce the on-rate and binding kinetics have to be seen in the broader context of distribution.  If the binding is faster than distribution then on-rates and off-rates become irrelevant, except to the extent to which they determine Kd.

At a conference like this, I'd have hoped to see something along the lines of 'unanswered questions and unsolved problems'.  How predictive are fragment properties of the properties of structurally-elaborated molecules?  Just how strong is the correlation of promiscuity with lipophilicity?  Is getting structures for protein-ligand complexes still a bottleneck?

So best wishes for an enjoyable and successful meeting.  Make sure to test the wits of the speakers with some tough questions.  It's character-building for them and loads of fun for everybody else.  Meanwhile here in Brasil it is 'imunização para insetos' at my place and I've cooked up a local response to enthalpy optimisation: Termodinâmica Macumba.

Molecular interactions are of interest in molecular design because the functional behaviour of a compound is determined by how strongly its molecules interact with the different environments in which they exist.  Although I'm talking primarily about non-covalent interactions, reversible covalent bond formation, for example between the catalytic cysteine of a protease and nitrile carbon, can also fit into this framework. Molecular design can be hypothesis-driven or prediction-driven and you'll have guessed from my last post which approach I favor. Hopefully at some point in the future we'll be able to predict well enough to do molecular design and when we do get there I think that we'll find that the models will have a strong physical basis.  Until then,hypothesis-driven molecular design will continue to have an important role.

In FBDD we think of ligands in terms of their component fragments and are particularly interested in the extent to which the properties of fragments determine the properties of structurally elaborated compounds. Comparing the affinties of ligands with the fragments from which they might have been derived is one way in which this question can be addressed and one will occasionally encounter the term 'deconstruction' in the FBDD field. Just as you need to be careful how you link fragments when assembling a ligand, you also need to be careful how you decompose a ligand into component fragments. In this blog post I'm going to use a well-known deconstruction study to highlight some of the things that you need to think about when deconstructing.

I like to think of molecular interactions in terms of generic atom types such as 'neutral hydrogen bond acceptor' or cationic hydrogen bond donor'. This is a pharmacophoric view of molecular recognition which is also relevant to bioisosterism and scaffold-hopping. Those who take a more physical view of molecular recognition would say that pharmacophoric atom-typing is just cheminformatics and somewhat uncouth. However, you can capture a lot of physics with atom-typing and it's not like placing atomic charges on nuclei is such great physics anyway...

When deconstructing a ligand molecule you want to minimise changes to the way in which a binding site might see atoms in the ligand. For example breaking the carbon-nitrogen bond of an amide and adding hydrogens is not a great idea because you’ll turn hydrogen bond donor into a cation (at physiological pH) and a strong hydrogen bond acceptor into a weaker one. Deconstructions that add or remove hydrogen atoms from nitrogen or oxygen atoms are usually not a good idea.   In the featured ligand deconstruction study, fragments 2 and 3 were derived structure from 1. The acyl sulfonamide group of 1 would be expected to be predominantly deprotonated under normal physiological conditions (a pKa of 5.4 has been reported for sulfacetamide). In contrast, fragment 2 would be expected to be predominantly neutral at normal physiological pH (benzenesulfonamide pKa is 10.1). This means that the deconstruction of the acylsulfonamide transforms an anionic nitrogen into a neutral one that is bonded to a donor hydrogen.  This makes it difficult to draw conclusions from the observation that the fragment does not bind to the target. Is the interaction between the relevant part of the parent ligand very weak or has the deconstruction changed the pharmacophoric character of interacting atoms?

The deconstruction of 1 to 3 effectively creates a cationic center (a pKa of 5.1 has been reported for dimethylaniline) and having two nitrogen atoms in the piperazine ring does introduce complications.  Two pKa values are observed for piperazine and in a recent study these were found to be 9.7 and 5.5 at 298K.  This tells us that protonation of one of the nitrogen atoms makes it more difficult to protonate the other one (which makes sense).  These measured pKa values also tell us that piperazine will exist predominantly as a monocation at normal physiological pH and the corresponding values for 1,4-dimethylpiperazine are 8.4 and 3.8.  If you take a look at the source that I used for the benzenesulfonamide pKa, you'll see that attaching a phenyl ring to a carbon that is bonded to a basic nitrogen will make that nitrogen less basic by about one log unit. Bringing this all together for compound 1 suggests that protonation of piperazine will occur preferentially at the left hand nitrogen (see figure above) and the that the relevant pKa will be about 7.4. Deconstruction to fragment 3 is expected to shift the preferred site of protonation to the other nitrogen.

So what is the protonation state of piperazine when compound 1 binds to its target? The closeness of the likely pKa to normal physiological pH makes it difficult to say and if the relevant proton/lone-pair is directed away from the protein surface then cationic and neutral forms may have similar affinity. At this point, I should mention that I couldn't find the value(s) of the pH at which the NMR experiments were performed (if this information is indeed there, I'll invoke the 'reading PDF on my computer defense') and the information really needs to be communicated in a study such as this one.

I'll mention a couple of other deconstructions to illustrate the point that changing an element may sometimes result in less perturbation of the relevant substructures.  Fragment 4 gets round the problem of deconstruction shifting the preferred site of protonation. The nitrogen atom in the parent molecule that is mutated into carbon will be a weak hydrogen bond acceptor because it is linked directly to an aromatic ring. It can be argued that mutating a weak hydrogen bond acceptor into a hydrophobic atom represents a smaller perturbation than mutating it into a cationic center. However, piperidine is more basic than piperazine so there will be less neutral form (which may or may not be relevant). Deconstruction to fragment 5 preserves (actually is likely to strengthen) the hydrogen bond acceptor character of the less basic piperazine nitrogen but is likely to decrease the amount of cationic form because morpholine is less basic than piperazine.

Hopefully this will have got you thinking in a bit more depth about ligand deconstruction and I'll finish off with a cartoon of how we might use deconstruction in lead optimisation.  First we check that we can can actually measure affinity for a fragment that is obtained by deconstructing the lead compound.  Then we assemble SAR (could be a good way to explore bioisosteric replacements) before incorporating the best fragments into the lead structure.  Essentially, the fragment assay allows us to assemble SAR in a more accessible region of chemical space. 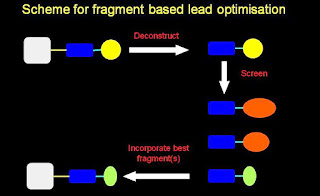