Molecular complexity is perhaps the single most important theoretical concept in fragment-based drug discovery (FBDD). The concept was first articulated in a 2001 article by Mike Hann at GSK and has implications that extend beyond FBDD. You might ask why I think that molecular complexity is so much more important than ligand efficiency and variations on that theme. My response is that the concept of molecular complexity helps us understand why fragment screening might be a good idea. Ligand efficiency is just a means with which to compare ligands with different potencies.

A complex molecule can potentially bind tightly to a target because it can form lots of interactions. Put another way, the complex molecule can present a number of diverse molecular recognition elements to a target. Sulfate anions and water molecules don’t have the same options although you’ll have ‘seen’ both binding to proteins if you’ve looked at enough crystal structures. There is a catch, however. The catch is that the complex molecule has to position all of those molecular recognition elements exactly where they are needed if that binding potential is to be realised.

Let’s take a look at Figure 3 from the article (the success landscape) in which three probabilities are plotted as a function of ligand complexity. The red line represents the probability of measuring binding assuming that the ligand uses all of its molecular recognition elements. This probability increases with complexity but can’t exceed 1. This tells us that if we just want to observe binding, nanomolar is likely to work just as well as picomolar. The green line is the really interesting one and it represents the probability of the ligand matching one way. It is this requirement for a one way match that gives this curve its maximum. Multiply the probability of a one way match by the probability of measuring binding and you get the probability of a useful event (yellow line) which also has a maximum. This tells us that there is an optimum complexity when you’re selecting compounds for your screening library. This optimum is a function of your assay system (i.e. target + detection technology) and improving your assay will shift the red line to the left.

This molecular complexity model is a somewhat abstract and it’s not easy to place an arbitrary molecule in Figure 3 for an arbitrary assay system. I’m not convinced of the importance of a unique binding mode for fragments because one fragment binding at two locations counts as two fragment hits. This is not a big deal because relaxing the requirement for unique binding leads gives a curve that decreases with complexity and we still end up with a maximum in the probability of a useful event.

I’ve used a different view of molecular complexity when designing compound libraries for fragment screening. This view is conceptually closer to ‘needle screening’ which was described by a group at Roche (11 authors, all with surnames in first half of the alphabet) in 2000. The needles are low molecular weight compounds which can ‘penetrate into deep and narrow channels and subpockets of active sites like a fine sharp needle probing the surface of an active site’. The needles are selected to be ‘devoid of an unnecessary structural elements’. My view of molecular complexity is that it increases with the extent to which a molecule is substituted. Substituents in molecules can be specified (and counted) using SMARTS notation so low complexity molecules can be identified by restricting the extent of substitution in addition to size. I’ve prepared a cartoon graphic which shows why you might want to do this. 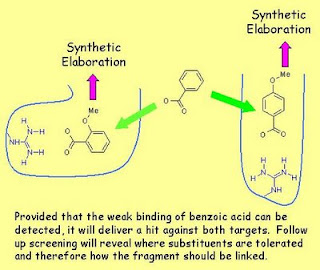 This is a probably a good point to stop although it’s likely that I’ll return to this theme in future posts. Before that I’ll need to take a look at Ligand Efficiency…

I love this paper! But on a practical level, it can be taken too far. Sure, ligand complexity can reduce the chances of binding to a given target, but if you do get binding, you are more likely to be able to move forward.

I can’t tell you how many times an unsubstituted biaryl ether or the like comes up in a fragment screen, and all the chemists (myself included) feel discouraged. Even in the example you gave, I’d be more excited about one of the methoxybenzoic acid fragments than benzoic acid itself.

In terms of designing fragment libraries, it’s a tricky balance to strike. Do you build your library from extremely simple fragments that most chemists will look at in disdain? Or do you include more complicated fragments that, while less likely to hit, will get people excited when they do? As with most things, the answer is probably “both”.