Efficiency can also be lipophilic

In the previous post, I questioned the validity of scaled ligand efficiency metrics (LEMs) such as LE.  However, LEMs can also be defined by subtracting the value of the risk factor from activity and this has been termed offsetting.  For example, you can subtract a measure of lipophilicity from pIC50 to give functions such as:

pIC50 – logD(pH)
As you will have gathered from the previous post, I am not a big fan of naming LEMs. The reason for this is that you often (usually?) can’t tell from the definition exactly what has been calculated and I think it would be a lot better if people were forced (journal editors, you can achieve something of lasting value here) to be explicit about the mathematical function(s) with which they normalize activity of compounds.  In some ways, the problems are actually worse when activity is normalized by lipophilicity because a number of different measures of lipophilicity can be used and because differences between lipophilicity measures are not always well understood (even by LEM ‘experts’).  Does LLE mean ‘ligand-lipophilicity efficiency’ or 'lipophilic ligand efficiency’?  When informed that a compound has an LLE of 4, how can I tell whether it has been calculated using logD (please specify pH), logP or predicted logP (please specify prediction method since there several to choose from)?

Have a look at this figure and observe how the three parallel lines respond the offsetting transformation (Y => Y-X).  The line with unit slope transforms to a line of zero slope (Y-X is independent of X) while the other two lines transform to lines of non-unit slope (Y/X is dependent on X).  This figure is analogous to the one in the previous post that showed how three parallel lines transformed under the scaling transformation.

It’s going to be helpful to generalize Lipophilic Efficiency (LipE) so let’s do that first:
LipEgen = pIC50  - (l ´ ClogP)

Generalizing LipE in this manner shows us that LipE (l = 1) is actually quite arbitrary (in much the same way that a standard or reference state is arbitrary and one might ask whether l = 0.5 might not be a better LEM.  Note that a similar criticism was made of Solubility Forecast Index in the Correlation Inflation Perspective. One approach to validating an LEM would be to show that it actually predicted relevant behavior of compounds. In the case of LEMs based on lipophilicity, it would be necessary to show that the best predictions were observed for l = 1.  Although one can think of an LEMs as simple quantitative structure activity relationships (QSARs), LEMs are rarely, if ever, validated in a way that QSAR practitioners would regard as valid.  Can anybody find a sentence in the pharmaceutical literature containing the words ‘ligand’, ‘efficiency’ and ‘validated’?  Answers on a postcard...
Offset LEMs do differ from scaled LEMs and one might invoke a thermodynamic argument to justify the use of LipE as an LEM.  In a nutshell it can be argued that LipE is a measure of the ease of moving a compound from a non-polar environment to its binding site in the protein.  There are two flaws in this argument which were discussed in our LEM critique which will be open access for another 10 days or so.  Firstly, when ligand binds in an ionized form, lipophilicity measures do not quantify the ease of moving the bound form from octanol to water because ionized forms of compounds do not usually partition into octanol to a significant extent. Secondly, octanol/water is just one of a number of partitioning systems and one needs to demonstrate that lipophilicity derived from it is optimal for definition of an LEM.  The figure below shows how logP can differ when measured in alternative partitioning systems and you should be aware of an occasionally expressed misconception that the relevant logP values simply differ by a constant amount. 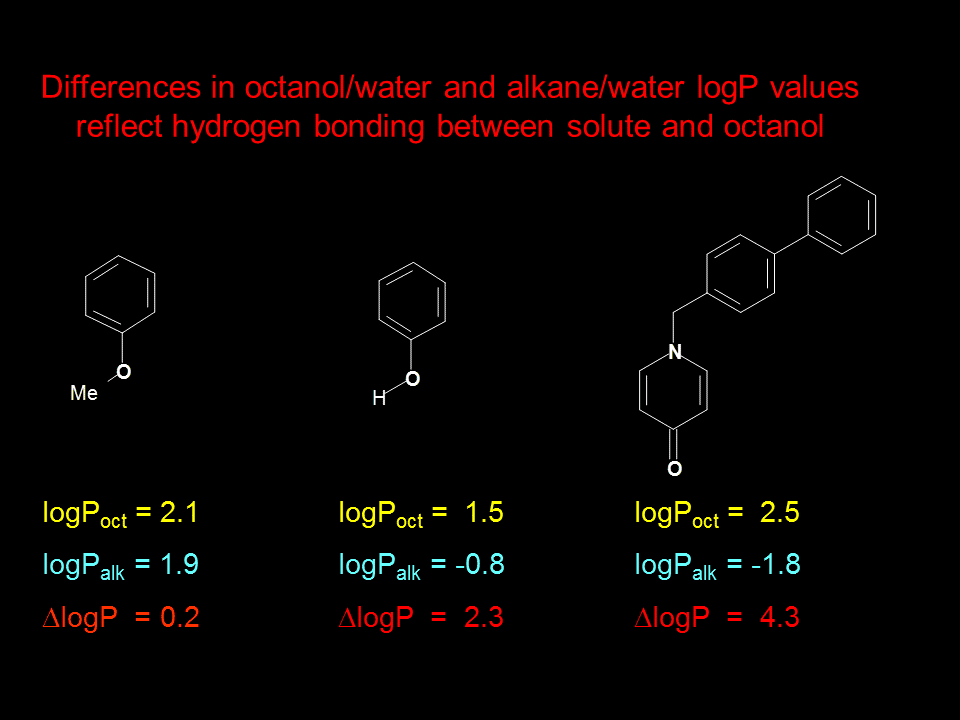 One solution to the problem is to model pIC50 as a function of your favored measure of lipophilicity and use the residuals to quantify the extent to which activity beats the trend in the data.  This is what exactly what I suggested  in the previous post as an alternative to scaling activity by risk factors such as molecular weight or heavy atoms and the approach can be seen as bringing these risk factors and lipophilicity into a common data-analytical framework.   Even if you don’t like the idea of using the residuals, it is still useful to model the measured activity because a slope of unity helps to validate LipE (assuming that you’re using ClogP to model activity).   Even if the slope of the line of fit differs from unity, you can set  l to its value to create a lipophilic efficiency metric that has been tuned to the data set that you wish to analyze.

This is a good point at which to wrap up.  As noted (and reiterated) in the LEM critique, when you use LEMs, you're making assumptions about trends in data and your perception of the system is distorted when these assumptions break down.  Modelling the data by fitting activity to risk factor allows you use the trends actually observed in the data to normalize activity.  That’s just about all I want to say for now and please don’t get me started on LELP…
Posted by Peter Kenny at 13:59