So I thought that I’d conclude this mini-series ( 1 | 2 ) of PAINS posts with some lighter fare, the style of which is intended to be a bit closer to that of a PAINS-shaming post ( 1 | 2 ) than is normal for posts here.  As observed previously, the PAINS-shaming posts are vapid and formulaic although I have to admit that it’s always a giggle when people spit feathers on topics outside their applicability domains.   I must also concede that one of the PAINS-shaming posts was even cited in a recent article in ACS Medicinal Chemistry Letters although this citation might be regarded as more confirmation of the old adage that, ‘flattery will get you anywhere’ than indication of the scientific quality of the post.  I shouldn’t knock that post too much because it’s what goaded me into taking a more forensic look at the original PAINS article.  However, don’t worry if you get PAINS-shamed because, with acknowledgement to Denis Healey, being PAINS-shamed is “like being savaged by a dead sheep”. 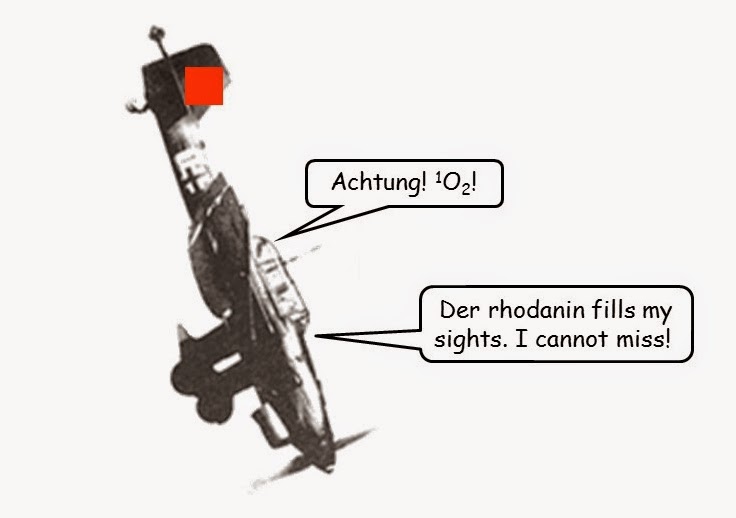 I should say something about the graphic with which I’ve illustrated this blog post.  It shows a diving Junkers Ju 87 Stuka and I’ll let aviation author William Green, writing in ‘Warplanes of the Third Reich’, tell you more about this iconic aircraft:

“The Ju 87 was an evil-looking machine, with something of the predatory bird in its ugly contours – its radiator bath and fixed, spatted undercarriage resembling gaping jaws and extended talons – and the psychological effect on the recipients of its attentions appeared almost as devastating as the bombs that it delivered with such accuracy.  It was an extremely sturdy warplane, with light controls, pleasant flying characteristics and a relatively high standard of manoeuvrability. It offered crew members good visibility and it was able to hit a target in a diving attack with an accuracy of less than 30 yards. All these were highly desirable characteristics but they tended to blind Ob.d.L. to the Ju 87’s shortcomings. Its use presupposed control of the air, for it was one of the most vulnerable of combat aircraft and the natural prey of the fighter…”

I really should get back on-topic because I doubt that Rudel ever had to worry about singlet oxygen while hunting T-34s on TheEastern Front.  I’ve promised to show you how to get away with polluting the literature so let’s suppose you’ve submitted a manuscript featuring PAINful structures and the reviewers have said, “Nein, es ist verboten”.  What should you do next? The quick answer is, “It depends”.  If the reviewers don't mention the orginal PAINS article and simply say that you’ve just not done enough experimental work to back up your claims then, basically, you’re screwed. This is probably a good time get your ego to take a cold shower and to find an unfussy open access journal that will dispense with the tiresome ritual of peer review and quite possibly include a package of downloads and citations for no additional APC.

Let’s look at another scenario, one in which the reviewers have stated that the manuscript is unacceptable simply because the compounds match substructures described in the original PAINS article.  This is the easiest situation to deal with although if you’re using AlphaScreen to study a protein-protein interaction you should probably consider the open access suggestion outlined above.  If not using AlphaScreen, you can launch your blitzkrieg although try not make a reviewer look like a complete idiot because the editor might replace him/her with another one who is a bit more alert.  You need to point out to the editor that the applicability domain (using this term will give your response a degree of authority) for the original PAINS filters is AlphaScreen used to assay protein-protein interactions and therefore the original PAINS filters are completely irrelevant to your submission.  You might also play the singlet oxygen card if you can find evidence (here’s a useful source for this type of information) for quenching/scavenging behavior by compounds that have aggrieved the reviewers on account of matching PAINS filters.

Now you might get a more diligent reviewer who looks beyond the published PAINS filters and digs up some real dirt on compounds that share a substructure with the compounds that you’ve used in your study and, when this happens, you need to put as much chemical space as you can between the two sets of compounds.  Let’s use Voss et al (I think that this was what one of the PAINS-shaming posts was trying to refer to) to illustrate the approach.  Voss et al describe some rhodanine-based TNF-alpha antagonists, the ‘activity’ of which turned out to be light-dependent and I would certainly regard this sort of light-dependency as very dirty indeed.  However, there are only four rhodanines described in this article (shown below) and each has a heteroaromatic ring linked to the exocyclic double bond (extended pi-system is highly relevant to photochemistry) and each is substituted with ethyl on the ring nitrogen.  Furthermore, that heteroaromatic ring is linked to (or fused with) either a benzene or heteroaromatic ring in each of the four compounds.  So here’s how you deal with the reviewers.  First point out that the bad behavior is only observed for four rhodanines assayed against a single target protein.  If your rhodanines lack the exocyclic double bond, you can deal with the reviewers without breaking sweat because the substructural context of the rhodanine ring is so different and you might also mention that your rhodanines can’t function as Michael acceptors.  You should also be able to wriggle off the hook if your rhodanines have the exocyclic double bond but only alkyl substituents on it. Sanitizing a phenyl substituent on the exocyclic double bond is a little more difficult and you should first stress that the bad behavior was only observed for rhodanines with, five-membered electron-rich heterocycles linked to that exocyclic double bond.  You’ll also be in a stronger position if your phenyl ring lacks the additional aryl or heteroaryl substituent (or ring fusion) that is conserved in the four rhodanines described by Voss et al because this can be argued to be relevant to photochemistry.

Things will be more difficult if you’ve got a heteroaromatic ring linked to the exocyclic bond and this is when you’ll need to reach into the bottom draw for appropriate counter-measures with which to neutralize those uncouth reviewers.  First take a close look at that heteroaromatic ring.  If it is six-membered and/or relatively electron-poor, consider drawing the editor’s attention to the important differences between your heteroaromatic ring and those of in the offending rhodanines of Voss et al.  The lack of aryl or heteroaryl substituents (or ring fusions) on your heteroaromatic ring will also strengthen your case so make sure editor knows.  Finally, consider calculating molecular similarity between your rhodanines and those in Voss et al. You want this to be as low as possible so experiment with different combinations of fingerprints and metrics (e.g. Tanimoto coefficient) to find whatever gives the best results (i.e. the lowest similarity).

So this is good place at which to conclude this post and this series of posts.  I hope you’ve found it fun and have enjoyed learning how to get away with polluting the literature.

Pete, you have now written extensively about problem compounds, but I confess that I am still uncertain about your position. Could you please clarify it concisely?

Do you feel that screening libraries should include all manner of compounds, researchers should publish any hits they find, and it is then up to other scientists to embark on lengthy efforts to show that the hits are not acting pathologically when they contain questionable moieties?

Or do you believe, as I do, that libraries should be purged of compounds containing moieties previously shown to be problematic? Obviously this does not exempt researchers from showing that their hits are not acting pathologically, but it hopefully moves the odds in their favor and reduces the number of false positives they end up pursuing.

Chemical space is bigger than we can ever even begin to sample, so why waste resources populating a library with - for example - alkylidene rhodanines, toxoflavins, and quinones?

Hi Dan, A concise statement of my position is that, like you, I do believe that some compounds are unsuitable for screening and I make extensive use of substructural criteria when selecting compounds for screening. Our positions appear to differ with respect to our views as to specifically what constitutes ‘problematic’ behavior of compounds and the extent to which that this can be predicted by the presence of substructural elements in the molecular structures of compounds. Our positions probably also differ in the extent to which we believe that assay interference can be taken as evidence for interaction of compounds with proteins.

For example, I would not regard the frequent-hitter behavior of alkylidene rhodanines, of unknown structure, in a panel of 6 AlphaScreen assays as particularly problematic behavior (unless I was using AlphaScreen). I would consider frequent-hitter behavior of alkylidene rhodanines in a panel of 40 assays of diverse type a lot more problematic especially if structures had been disclosed.

We also need to be careful not to be selective in our use of evidence when presenting it in support of our opinions. For example, the Michael acceptor ability of an alkylidene rhodanine would be a concern for many chemists (including me) but the frequent-hitter behavior of alkylidene rhodanines in AlphaScreen assays cannot be invoked as evidence that this is actually happening because rhodanines that lack Michael acceptor ability also show the frequent-hitter behavior in AlphaScreen assays.